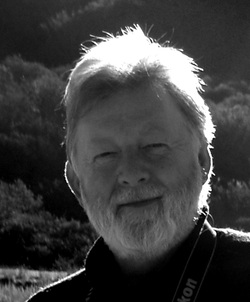 Photography has been a passion ever since my father gave me an Ilford Sporti camera for my sixth birthday. Most of the really early photographs still in existence must have been taken by him, also as I am usually in the photograph, but there are enough obviously taken by a six year old to confirm my memory of being keen on photography and what I could do with it.

I am principally an artist in watercolour, gouache and acrylic, and I approach photography as an extention of my painting.  The majority of my photographic work was as an adjunct to my artwork, with  the occasional foray into commercial work, but a few years ago I was asked to help with some freelance wedding photography for Crear in Argyll, Scotland, receiving many commendations.

Recently my focus has concentrated on publicity work for my wife Gill's wedding and event flower business Love Dove Cottage. Now we have launched a new venture with 'Love Dove Studio', a gallery and studio selling our artwork and that of other Argyll creative artisans. Gill has also been honing her photographers eye and some of her work will be appearing here too. 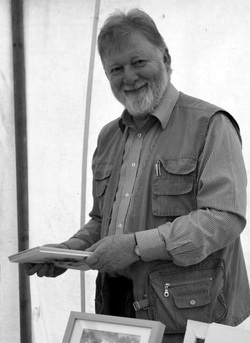 Born in Uddingston, Lanarkshire, Scotland in 1953, I have been painting and drawing for as long as I can remember. My father, who went under the name of Mackean Stewart, produced many excellent artworks until his death in 2010. His Kintyre paintings were particularly popular and prints & cards of his work are still available. Go to The Oystercatcher Gallery for more information.

At Edinburgh College of Art, principally tutored by Hugh Buchanan but also with Paul Furneaux and Joan Smith confirmed my desire to pursue painting as a career. By this time my wife Gill and I had opened The Oystercatcher Crafts & Gallery in Campbeltown, Kintyre - winning a Business of the Year Award in 1994. We sold the business in 2011 and Gill is now continuing her floral work for weddings and events as Gill Stewart Flowerscape, a business which is becoming very popular.

I found myself being asked to do photography work and photographed at over 100 weddings for a well-known Argyll wedding venue between 2010 and 2012,  and with some considerable success. However, painting, drawing and illustration remain my principal passion, with watercolour and gouache my preferred media for painting, but I also work in acrylic and pastels when the occasion demands it.

As a member of Artmap Argyll, the artist's open studios network, I have taken part in a number of exhibitions, workshops and demonstrations in association with other Artmap Artists. I was Chairman from 2009 to 2012, and Vice-Chairman in 2013. Our workshops at 'The Best of The West Festival' (BOWFest) at Inveraray Castle, were a big hit.

My work is represented in many private collections in Britain, Europe, Australia, Canada and the United States.